Your kind letter of the 6th and 7th was received and read with much pleasure and I was glad to hear that all were well at home. I am usually well at present and are very thankful for my health being spared so long for it is awful to be sick down here so far from friends and home. But this is the best place in the world to learn how to appreciate a friend. But we all have our friends and the sick are taken care of as well as they can be where so many are sick.

When we started from Washington we had 90 odd men in our company ready for duty and now we cannot get out 30 men that are able to do anything and our loss at Fair Oakes in killed, wounded, and missing was only 11, and the rest of the regiment has suffered in proportion so you can judge how unhealthy it [is] here at the South for northern men. And it is not the weakly ones that suffer the most for the largest, toughest men in the company are now sick—men who have endured hardships all their lifetime. But it may be my turn next for they say it is a long road that has no turn. There is hardly a boy in our company but have been sick more than I have. But a great deal of sickness is brought on by worrying about home. I have made up my mind that I can take care of myself down here that you can at home. And so let the world wag along as it will. I’ll be gay and happy still.

The pony is all sound and until a few days back has been well. I almost expected to hear of Allen’s death for the last time I saw him he looked bad. But it is some consolation for one to die at home amongst friends. It must almost kill his mother but this war is making many desolate homes.

The boots are alright and are a good fit. You wanted to know how we lived/ We live very well most of the time but sometimes when we are on a long march or the roads are very bad, we are rather hard up for the wherewithal, but I have not seen the time yet when I was very hungry. But the boys say I would live where they would starve. When we are settled down in camp, we have rations of hard bread made in the shape of soda crackers, tea, coffee, sugar, molasses, dried apples, [and] some potatoes. For meat we have salt and fresh beef, smoked side pork, and barrel pork, and vinegar salt soup mixed with vegetables dried for soups. And yesterday, three of us boys went a fishing down to [the] James river and got fish enough for 4 of us—quite a mess—and some sunburnt backs to boot for we had to go where the fish were and I think it is wrong to go hungry when there is anything to be had and in the enemy’s country too. So we had fresh pork, mutton, duck, chicken, and beef extra. But I don’t know but it is wicked but while I am here, there must anything try to bite me.

I spent the 4th [of July]—most of the day—backing knapsack through the mud and rain. We have had some awful warm days here. I will send you an old gold pen to you and I wish you would turn it in towards a new one. Get a good one and not too large—this one is plenty large enough—and I will pay you the balance. This is all the paper I have and so I must stop. I have found a thimble. Thanks for what you have sent me. My love to all and write soon. From your loving brother, Albert.

We go out on picket today. 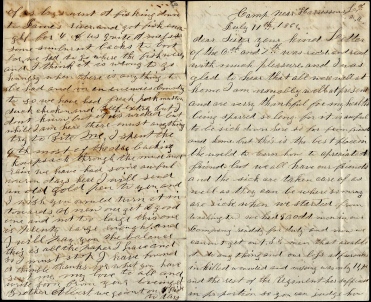 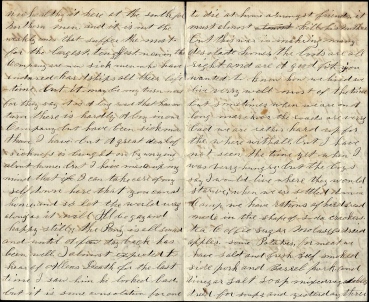