Yours of the 17th came to hand in due time and I was very glad to hear that you were well and hope these few lines may find you the same. I [am] well as usual and that is pretty well now. I tell you, we have some sickness in our company and have lost one boy by the name of [Oscar F.] Sage from East Bloomfield. ¹ He had the inflammation on the lungs and was sick about a week. We sent him home last Monday and there is but one in the company now that is very sick and we have not lost more than 4 or 5 out of the regiment — not any more than if they were at home — and I think as soon as we get dry weather, there will be but few cases of sickness. The weather is very changeable and not cold enough to be uncomfortable, and it seems as though it rained every day but it is not to time to expect better weather and then we shall live like pigs in the clover. What we cannot eat, we will tread under foot, and by that time I hope we shall be where we shall not have any conscientious scruples about hunting up the hen roosts and juvenile squealers and what other extras we may think of. But here we have to be pretty steady as a general thing. But one good thing is, if anybody brings any liquor on the ground, he is courtmartialed and punished accordingly and you see that there does not much liquor find its way onto the grounds. And it is $25 fine in the City to sell it to a soldier.

Since my last, we have some new arrangements in our regiment. We have to have a new Colonel and [Chauncey S.] Aldrich is to be adjutant. Some of the captains have resigned and taking it all around, there was considerable feeling in all sides.

You speak about that capture of Fort Donaldson as a great victory. It truly was great and they feel it too. We may truly say that the backbone of the rebellion is broken and they must soon come under. There was great rejoicing down here and a portion of the city were wild with joy and the booming of cannon was to be heard in every direction and it was a bitter pill for poor secesh but it had to go down and it will do him good.

Yesterday — the birthday of Washington — was properly respected and the roar of cannon and rattle of musketry was almost deafening. It sounded like a tremendous thunderstorm. Our regiment was in line at 6 o’clock and fired 3 salutes of blanks at the raising of the flag, and then at one we were in line again and heard Washington’s Farewell Address to Congress. It was read by Aldrich. And after that we marched to the parade ground and fired 7 or 7 more rounds. And while hearing the address, I spied carved on a tree, “J. C. Bancroft, Boston.” Who knows but that it was Father’s cousin. At dress parade we fired 10 rounds more and that ended the doings for the day.

This last week two regiments of our brigade were moved across the river although the roads were almost impassable. It took over 100 6-mule teams to move each regiment’s baggage but Uncle Sam wanted them and so you see that he had them. Everything now looks like the speedy ending of this war. Certainly by the middle of April, [the] rebellion will be dead and buried and perhaps before that. Something seems to whisper to me that I am soon going home.

If you can make out these lines, you have them and you can copy them and save them. I came across them and thought you would like to hear them but as I have two letters more to write today, I will not write any more at present. I am making up lost time today in the letter line. I had 5 behind yesterday and but 2 more now. Write soon and direct to W. W. Clark. Washington. This is from A. H. B. 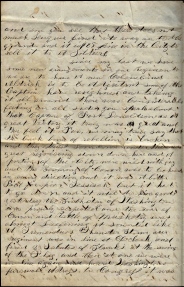 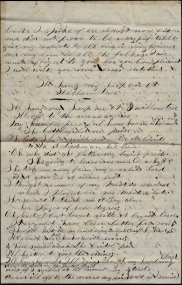 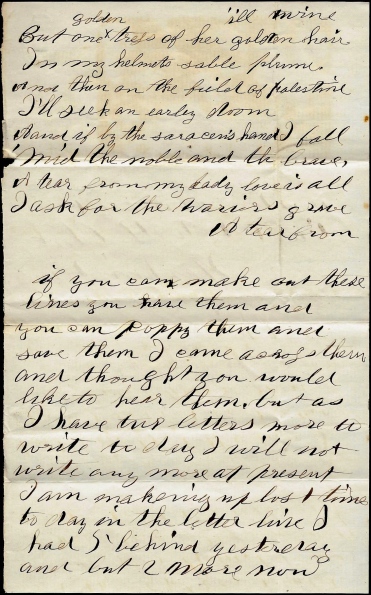