I now take my pen in hand to let you know that I am well and sound and hope these few lines may find you the same. I suppose before this you have heard of the last battle and perhaps count me amongst the dead or wounded but I have been spared this time while thousands have been killed and wounded.

The first indication we had of the enemy was a cannon ball—and then another, sounding more like a swarm of bees in a great hurry but doing no harm. This was about 11 in the forenoon. And then the order was to fall into line for the Rebs were driving in our pickets (which they had done the day before) and in five minutes our Brigade was in line and the 81st New York and 98th were sent out to support the pickets. They marched into a piece of woods which our men have been felling to prevent them from coming on to us and we were put in to the half-finished rifle pits for them to fall back on in case they were driven back. The 92nd [New York] was to the right of us and between us was a small fort with three small cannons inside and three out. We were in the pits nearly an hour before we saw anything of the enemy. In the meantime, those in front of us were hammering away at them and the little Brass Boys were speaking to them once in awhile but their balls had been kept too long and broke all to pieces when they got over into the woods. But soon we saw what was to pay. Those in front came running back beyond us and the obnoxious Rebel flag was seen bearing down upon us through the slashing when the Colonel said, “Take good aim boys, and let them have it,” and for the first time we drawed a bead on the Rebs and then they were more than 50 rods [275 yards] off, but they felt it. We loaded and fired as fast as possible and the canister shot was poured into them from the cannon but they still bore down upon us until within about 20 rods [100 yards] when what there was left of them turned and went back. But there was not one-fifth of them able to get back out of the two regiments that started out.

But there was fresh troops ready to take their places and we saw that they were coming down on us on both sides and in the center and that the cannons were deserted and the horses nearly all killed and wounded and floundering in their harness. Our Lieutenant Colonel [Abijah J. Wellman] was wounded and the Colonel [Jonathan S. Belknap] no where to be seen and the Major [Reuben V. King] also had got out of the way or somewhere else and the regiment gave away for a moment. When remembering that we had no orders for doing so, we rallied into the pits again and with a shout of defiance we poured in the leaden storm, doing fearful execution, but they swarmed on all sides and we had to run or be taken prisoners. We fell back across our camps and there met reinforcements and from that time until dark, we were fighting anywhere we could see Rebs. But there was a fault somewhere. If Couch’s Division had supported our left as he should, we never need to have been driven from our camp and lost everything. But the battle is over. Our dead are buried. Our wounded are cared for. The enemy are driven beyond our camps and we can draw any signal from it we see fit. But it was a bloody field. ¹

I was over to help bury our dead and they were to be seen in every direction—sickening the beholder and making one think what a blessing war is. But you will have all of the particulars in the papers and so I will begin to close. The boys from our way are all well. Tip is well. Henry Crain [Crane] wished me to say for him that he is usually well and he wished to have his folks write to him for he would like to know and you can tell them when you see them.

I wish you would send me some thread and a needle or two for the Rebs have got mine and I will send you a dollar so you can send me stamps once in awhile as I need them. I will also send you a relic keepsake. We are now in the rear so you need not worry for my safety and I never was in better health in my life. Dave need not say anything about running but this is just half my store in the letter line and so I will close. Write soon and give my respects to all my friends. I forgot to say all was in the hospital the last I heard.

¹ Bancroft was describing the Battle of Fair Oaks, Virginia, [or Battle of Seven Pines] on 31 May 1862 in which the 85th New York Infantry had nine enlisted men killed, 5 enlisted men mortally wounded, 4 officers and 40 enlisted men wounded but recovered, and 21 enlisted men missing. 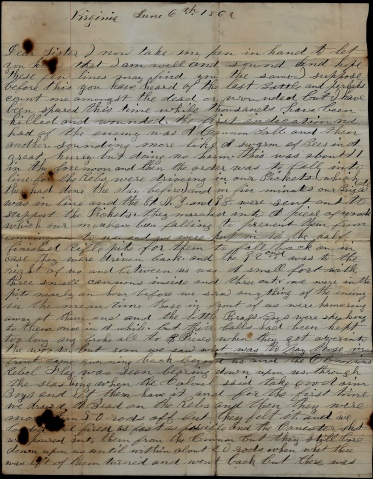 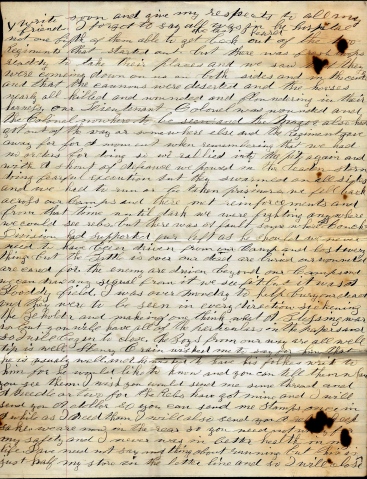