You ay or may not be surprised at receiving a letter dated from this place but  doubtless you think it high time you received one from some place but I suppose you are getting impatient to know where I am and how I came here. So I will tell you all about it. 1st we came to Rochester and I disposed of my fur—three for 25 and 4 for 28 cents. At 9 we started for Buffalo where we arrived all right about 7. Next day we started for the wharves and tried to find a place but all were full and those who were not did not want raw hands and the very natural result was that before dark that night, we were pretty thoroughly disgusted with the boats and the whole concern generally. And so at 11 o’clock the next day, we took the train for Detroit where we arrived at about 10½ o’clock Friday night, found lodgings for the rest of the night, and the next morning we started to explore Michigan. For several miles along the railway where we walked, it is well settled.

But before I proceed any farther, I must say a few words about Canada. I could see the difference as soon as we left the ferry boat and began to move along through the Province. I honestly believe we did not pass through a single place as large as Canandaigua nor a single residence as fine as as the Old Squire or Shafers and there is a good deal—in fact, it is half wood and low swampy land—inferior timber—and very few miles of any kind in sight of the railroad. But I feel sleepy and you will perhaps feel the same reading it and so I am going to bed now. Good night.

We started for Saginaw and got as far as Grand Blanc—4 miles from Holly and 7 from Flint—when I made up my mind that it was best for me to have some money and so I started for Fenton where I found Mary Carnes and stayed there over night. Hiram wanted me to stay and learn the trade but that was out of the question. In the morning, I went 7 miles west by southwest to Deerfield and found H. & P. Abrams living together on 60 acres & Ezra ½ mile off on forty. I went to see Ann. If I had seen her anywhere else, I would hardly have known her. She looks like a woman at 35 [rather than] 25. Ma’am Abrams had two chills of the ague. She looks bad and I fear she cannot last long. Kate looks very much the same as when you saw her. She has two children—not very well trained, I should judge, by the way the girl who is just old enough to talk some talks back but they seem to think it is funny and so they must take it as it comes.

Mr. A. looks the same and I guess he is the same. At all events, he could not accommodate me with the needful. From all I can learn, he rather disputes the chance, but to me he said little or nothing against it. He said it had been rather hard time with him for money and after noon I was talking with Pete and he said he knew his father to have only 12 shillings. He said that if he had the money, he would have let me had some, whether it was owing to us or not. I think Father had better send me his accounts. Tell him that if he sends them—as I rather wish he would—he would to be very careful in drawing them off about dates and small items. In short, send me an account that can be sued for if necessary. He wanted me to write you about a forty acre lot right opposite Richardson’s. It has a log house and small out buildings, mostly cleared, a wood lot about the right size for $500. I think I can do better than that. It is rather sickly there I should judge as  there is so much ague.

I left Deerfield for the town of Rose where George Southworth lives. They are all the same good-hearted friends. They were in York State. Mary Alice as she calls her girl is a smart one for her age. She is afraid of nothing and spry as a cricket. I stayed with them over night and the next morning George started for Saginaw and I rode with him as far as Grand Blanc and on the way I managed to get him to say something about his accounts. He says that he supposed that instead of his owing you anything, you were owing him. At all events, I am better satisfied with George than Abrams. Howsonever send the accounts all straight and I can collect Abrams account and if it appears that George is ahead, I can make it square.

But here I am and expect to stay here for the next 6 months at $18 per month and at the end of that time, I may go further west and buy a small farm of 100 or 200 acres if you will help me or I can come and attend school this winter. I do not expect to come in less than four in any way. Remember me as ever yours, — W. Bancroft 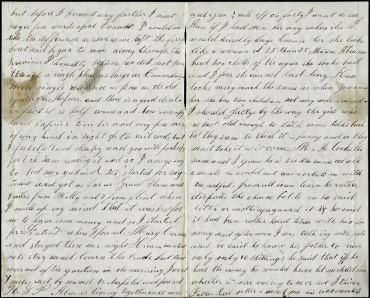